Let’s go invent tomorrow instead of worrying about what happened yesterday. - Steve Jobs

Jira is an issue tracking, project management, and bug tracking tool that is compatible with agile methodologies for organizing software development. 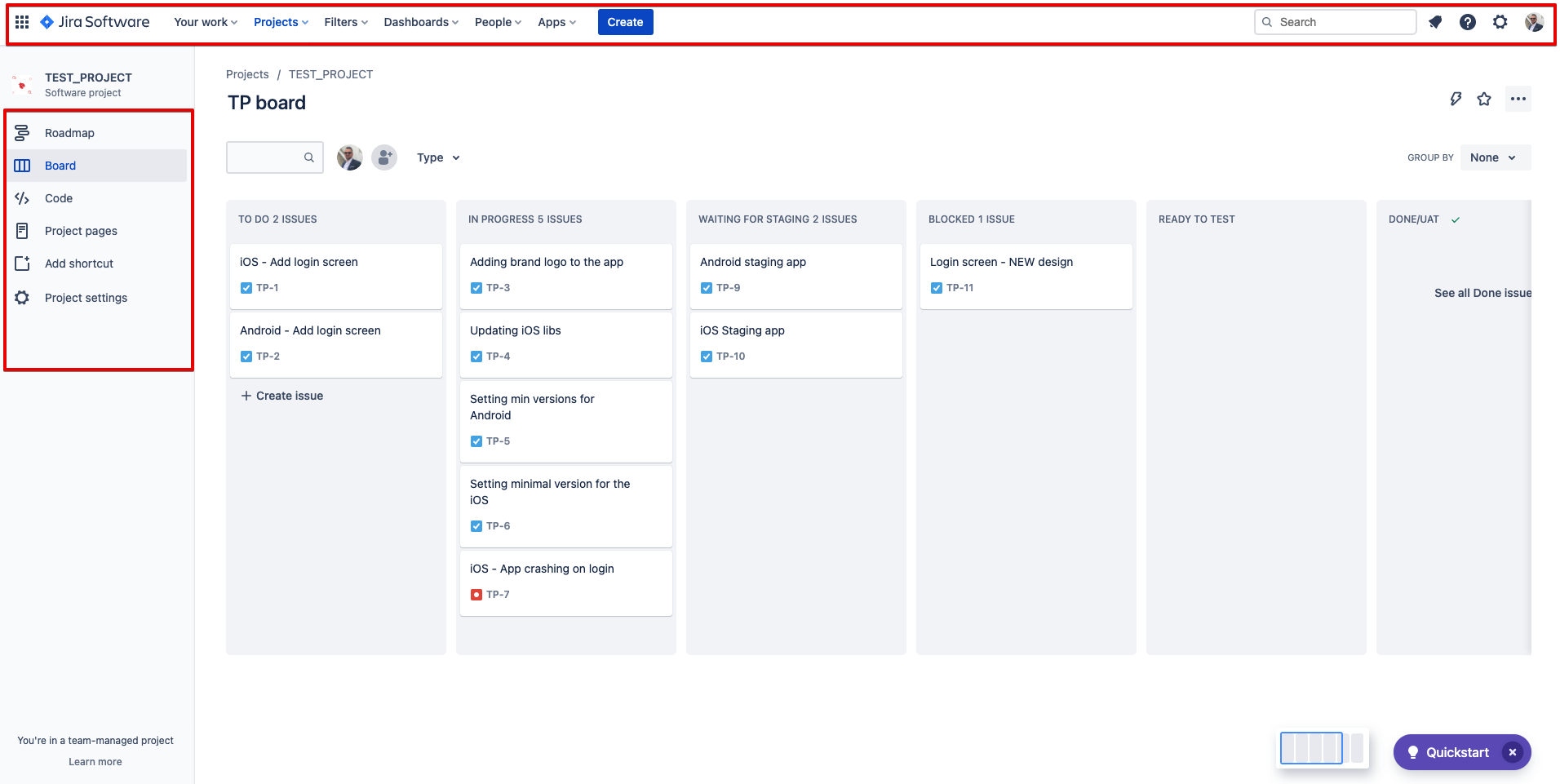 The product name is a truncation of Gojira, the Japanese word for Godzilla. The name originated from a nickname Atlassian developers used to refer to Bugzilla, which was previously used internally for bug tracking. It's pronounced Jira (/ˈdʒiːrə/ JEE-ra). Source - Wikipedia

Jira uses different terminology than Productive, let's have a look at of the terms that are used in Jira.

All work items are called Issues in Jira and are segmented into:

Quick tip: you can quickly start creating an Issue by pressing “c” on your keyboard or “+” in the Jira sidebar menu.

The main difference that could cause confusion and raised eyebrows when switching from Productive to JIRA is that tasks are now Issues! All other terminology is the same.

For every issue, there is a priority that can be set 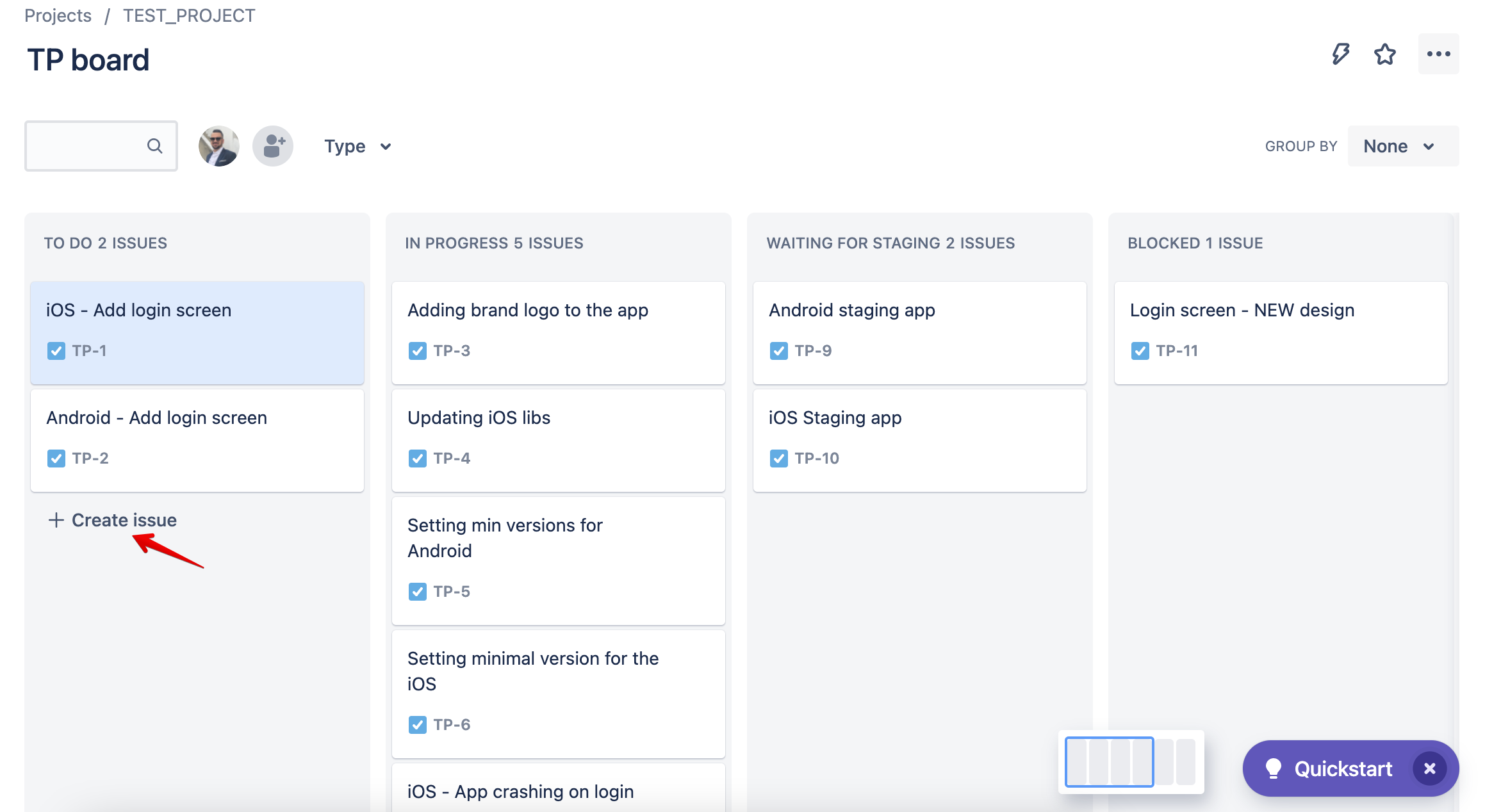 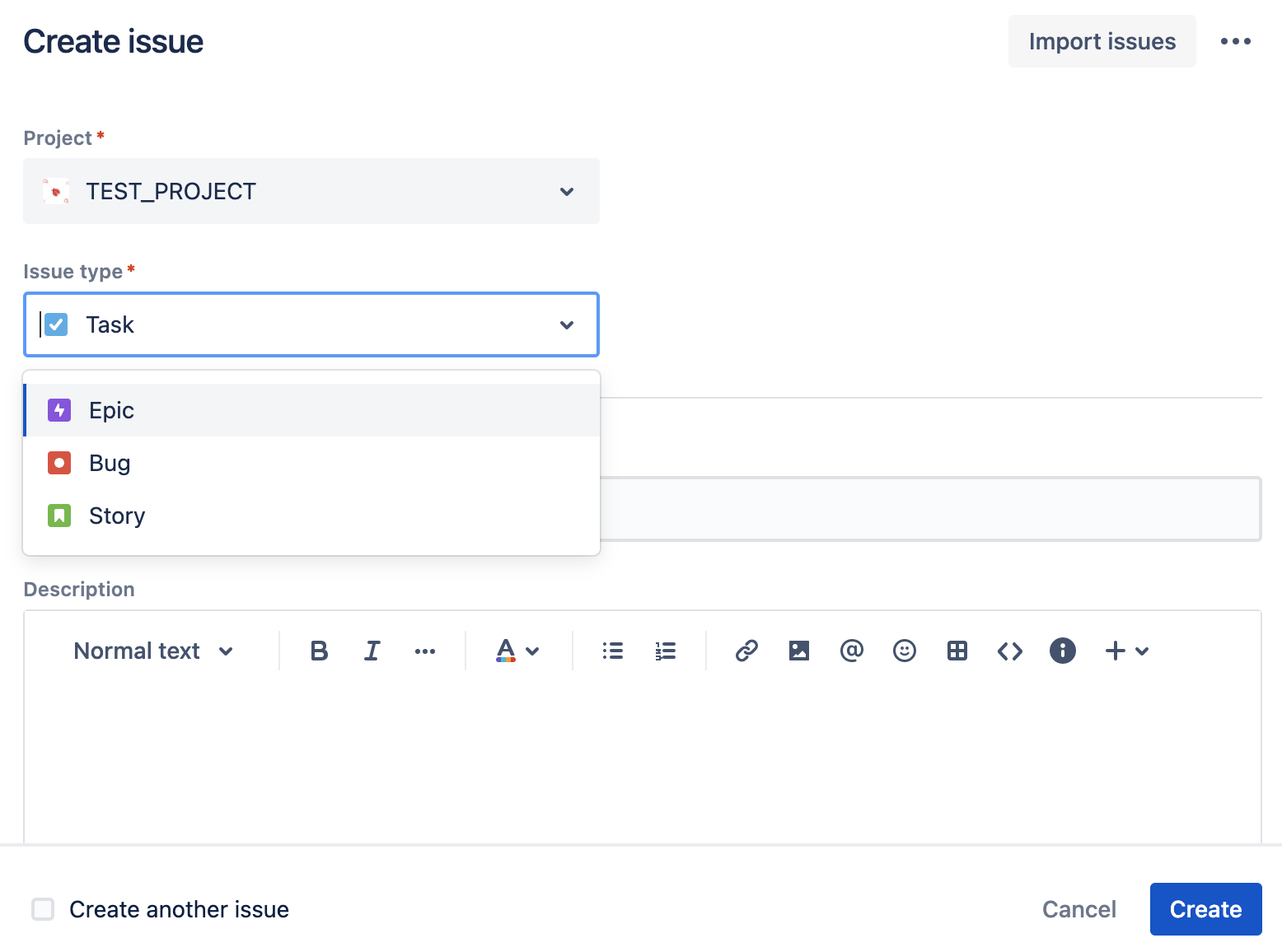 All Issues have a status they can be set to. Issue statuses can be configured per projects. For example, let's use this project board: 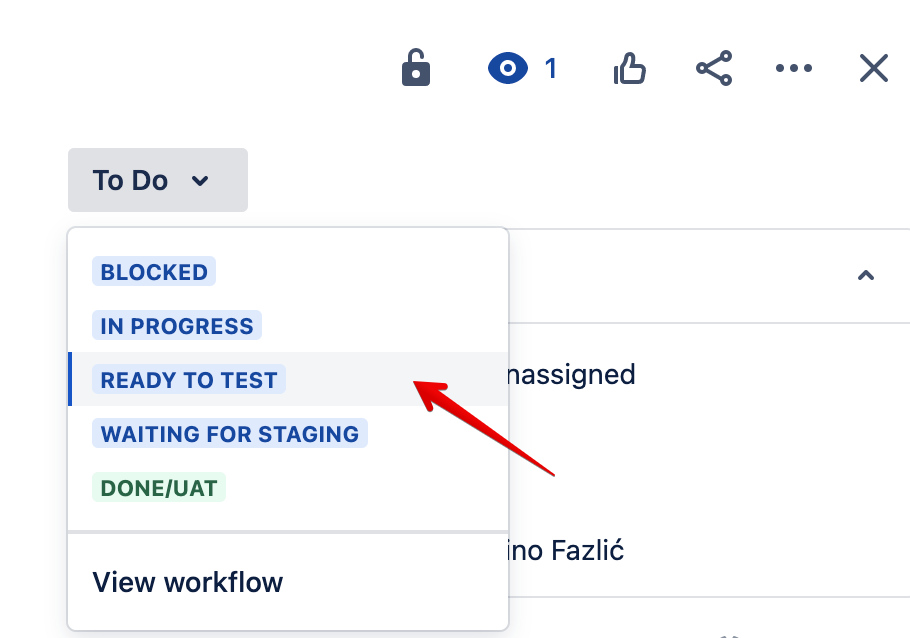 Every project board is configured differently, most of the time special fields in the new Issue creator will have sprint and fix version fields.

Sprint — also known as an iteration — is used to determine which current sprint issue is tied to. It is a short period in which the development team implements and delivers a discrete and potentially shippable application increment, e.g. a working milestone version.

Fix version - field is used for the version you plan on releasing with a feature or bugfix to production.

The backlog is the global "to-do list" for upcoming releases. A backlog is usually composed of three key hierarchical pieces:

The Active sprints display the issues that the team is currently working on. You can create and update Issues, and drag and drop them to transition them through a workflow in the scrum board.

How the new sprint is created:

This is the part of Jira where all you ever worked on is being documented, here you can find things you worked on, things you viewed on the project, everything that was assigned to you, and things you have marked with a star.

Reports give you a graphical overview of the different aspects of your plan.

The most important ones for us are the burndown chart and the velocity chart.

A burndown chart shows the amount of work that has been completed in an epic or sprint, and the total work remaining. Burndown charts are used to predict the team's likelihood of completing their work in the time available.

Burndown charts are useful because they provide insight into how the team works. For example:

The velocity chart shows the amount of value delivered in each sprint, enabling the team to predict the amount of work they can get done in future sprints. It is useful during sprint planning meetings, to help decide how much work can feasibly be committed to.

JIRA board's filter is an issue filter (a JQL query) that specifies which issues are included on the board. For example, the board may include issues from multiple projects, or only one project, or a particular component of a project.

JQL stands for Jira Query Language and is the most powerful and flexible way to search for your issues in Jira. JQL is for everyone: developers, testers, project managers, and business users.

Releases represent points in time for the project. They can be used to schedule how features are rolled out to users, or as a way to organize work that has been completed for the project.

In Jira Software, each release is called a version! A version is a set of features and fixes released together as a single update to your product.

Assigning issues to versions help to plan the order in which new features (stories) for the application will be released to users. In Jira, you can view issues according to which version they belong to. This helps plan upcoming versions of the application, which may span multiple sprints.

You'll probably spend most of your time looking at the active sprint: 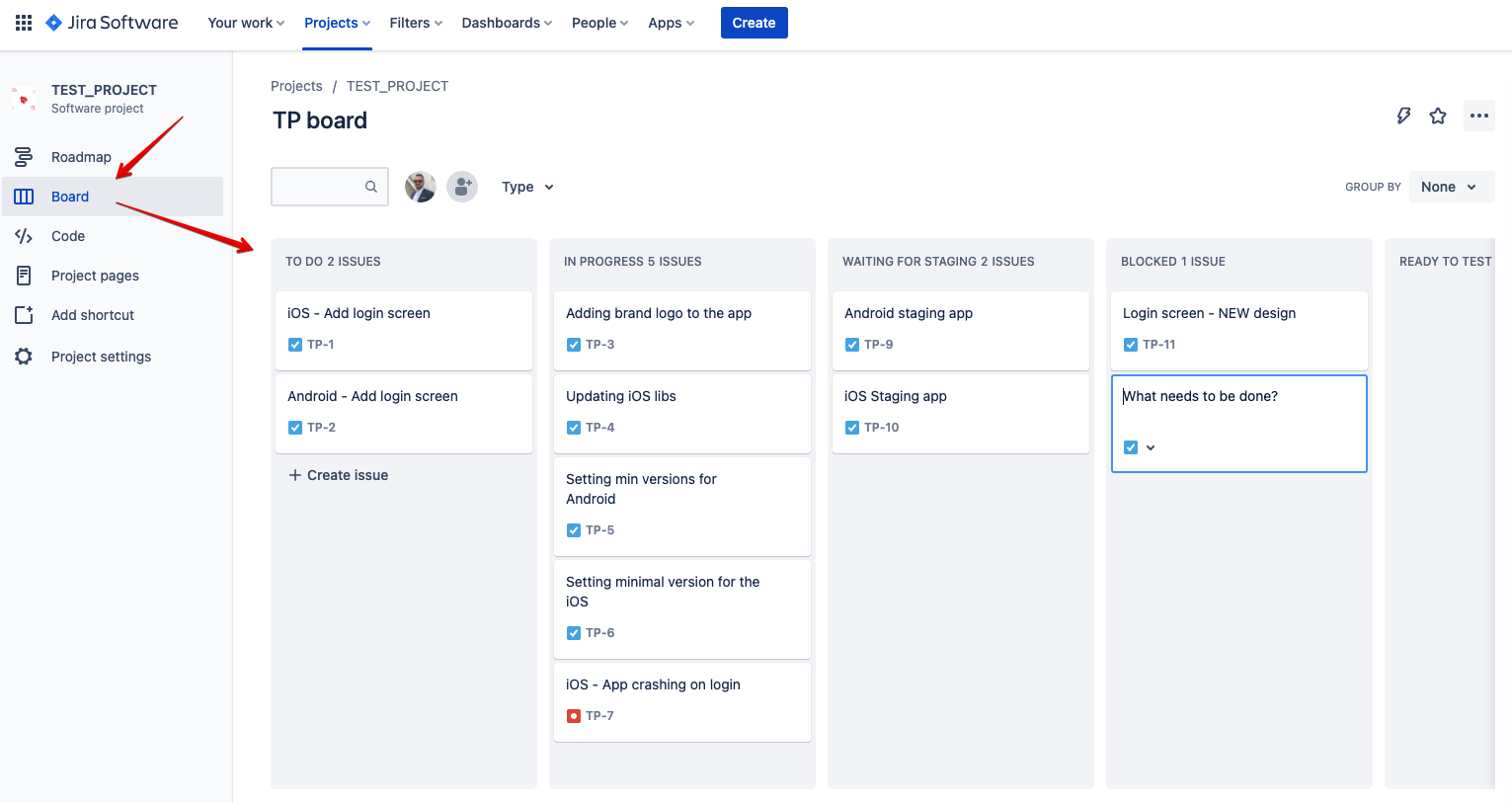 Confluence is a team workspace in which the team can create, capture, and collaborate on ideas for the project. It helps the team to structure, organize, and share work, so every member has visibility into knowledge and access to the information they need regarding the project.

Confluence is organized into spaces. Spaces are collections of related pages that the team can work on together. Most organizations use a mix of team spaces and software project spaces:

Personal space is mostly used as a sandbox to organize your notes, keep track of personal OKRs and goals.

Confluence and Jira complement each other. Confluence is used for storing thoughts, plans, and knowledge of the team, while Jira is used to track issues and organize work.

Xray is a Test Management tool that provides the structure to plan, organize, and report on the progress of testing as well as the readiness to deploy.

It enhances agile boards by tracking the requirement status and test execution progress in real-time. Using Xporter you can generate advanced reports that can be exported to docx, xlsx, or pdf.

To create a new test issue follow these steps:

Step 3: Type a Summary for the test and fill at least all mandatory fields marked with an asterisk. 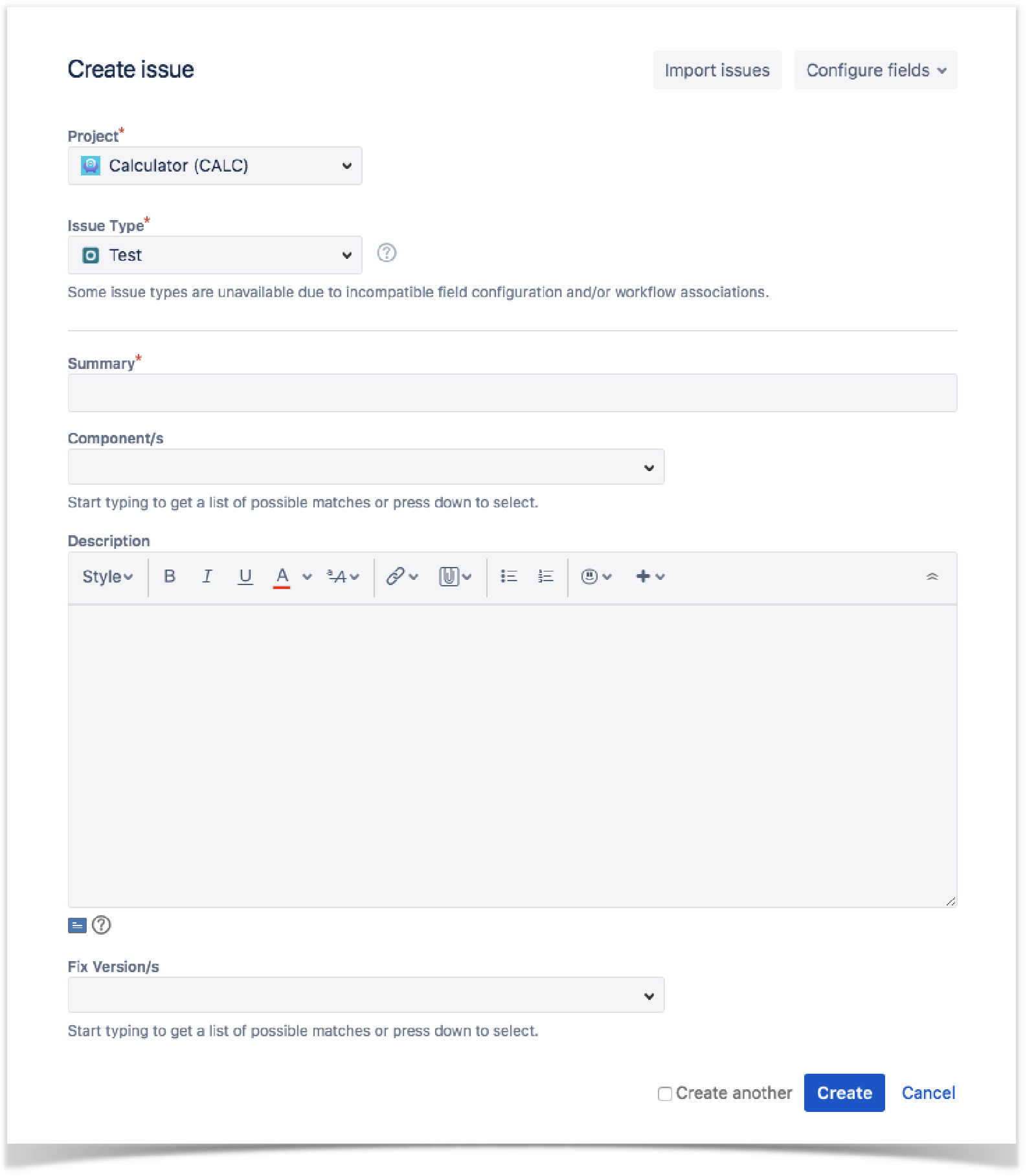 There you have it, your very own first test in Xray. For in-depth information about Xray and JIRA test integration you can follow this link.