This document is a short primer and introduction into all things called software testing. There is no particular order.

You can also use the Wiki article for software testing or the ISTQB syllabus as a starting point.

This is just a very rough approach for testing a certain feature. What you do in between is what actually counts for which the rest of this Handboook should provide plenty of inspiration.

7 Basic Principles of the Context-Driven School

A balanced approach to software testing, taking into the consideration all aspects of a given project, will usually mean taking varied approaches depending on what the project calls for.

This means there is no silver bullet in software testing, but you can always take a hint from the context-driven school:

Testing can show that defects are present, but cannot prove that there are no defects. Testing reduces the probability of undiscovered defects remaining in the software but, even if no defects are found, testing is not a proof of correctness.

Testing everything (all combinations of inputs and preconditions) is not feasible except for trivial cases. Rather than attempting to test exhaustively, risk analysis, test techniques, and priorities should be used to focus test efforts.

A small number of modules usually contains most of the defects discovered during pre-release testing, or is responsible for most of the operational failures. Predicted defect clusters, and the actual observed defect clusters in test or operation, are an important input into a risk analysis used to focus the test effort.

If the same tests are repeated over and over again, eventually these tests no longer find any new defects. To detect new defects, existing tests and test data may need changing, and new tests may need to be written. (Tests are no longer effective at finding defects, just as pesticides are no longer effective at killing insects after a while.) In some cases, such as automated regression testing, the pesticide paradox has a beneficial outcome, which is the relatively low number of regression defects.

Some organizations expect that testers can run all possible tests and find all possible defects, but principles 2 and 1, respectively, tell us that this is impossible. Further, it is a fallacy (i.e., a mistaken belief) to expect that just finding and fixing a large number of defects will ensure the success of a system. For example, thoroughly testing all specified requirements and fixing all defects found could still produce a system that is difficult to use, that does not fulfill the users’ needs and expectations, or that is inferior compared to other competing systems.

Rapid Software Testing is a methodology and a class about it, authored by James Bach and Michael Bolton, focused on doing the fastest, least expensive testing that still completely fulfills the mission of testing.

It is hard to enumerate all ways in which you can test software.

What is a test anyway? One way to look at it is that a test is anything you do with software that will give you insight into how it behaves under certain conditions. But we could debate that until we're in a drunken stupor. Have a look at Michael Bolton's opinion on the topic as well.

Let's be a bit more pragmatic and look at one possible categorization of the types of test you can conduct.

N.b., this categorization does not cover every single test type you can execute.

The way you test ranges from fully formal/algorithmic/scripted to fully random.

Script-based testing is slow and tedious, but good for confirming previously implemented functionalities are still working as expected.

Exploratory testing is faster at finding critical issues, usability problems, and unforeseen circumstances, but is usually incomplete and not fully reliable since it heavily depends on the tester's skill and experience.

You have to determine what will you focus on when you do testing. It is good to focus on one thing to keep your mental capacities sharp.

We can crudely divide the focus into two categories: functional and non-functional testing.

The goal of functional testing is to verify that the application is behaving the way it was envisioned to.

When doing functional testing, you should both rely on the requirements set out in a particular task, and think outside the box to find ways in which these requirements might be wrong or insufficient.

Non-functional testing is used for testing those areas of a certain software product that is less concerned with "what it does" which doesn't make it any less important.

Sometimes you don't want to test the entire app.

We use smoke testing to verify that a certain build of the product is stable enough to be further tested and that all major, obvious features are not heavily broken.

Confirmation testing is done to check that a certain bugfix resolved a previous issue.

Regression testing is used at certain milestone points in the app lifecycle (e.g. before the release) to catch some specific failing cases that might not have been tested often during development.

What is exploratory testing? 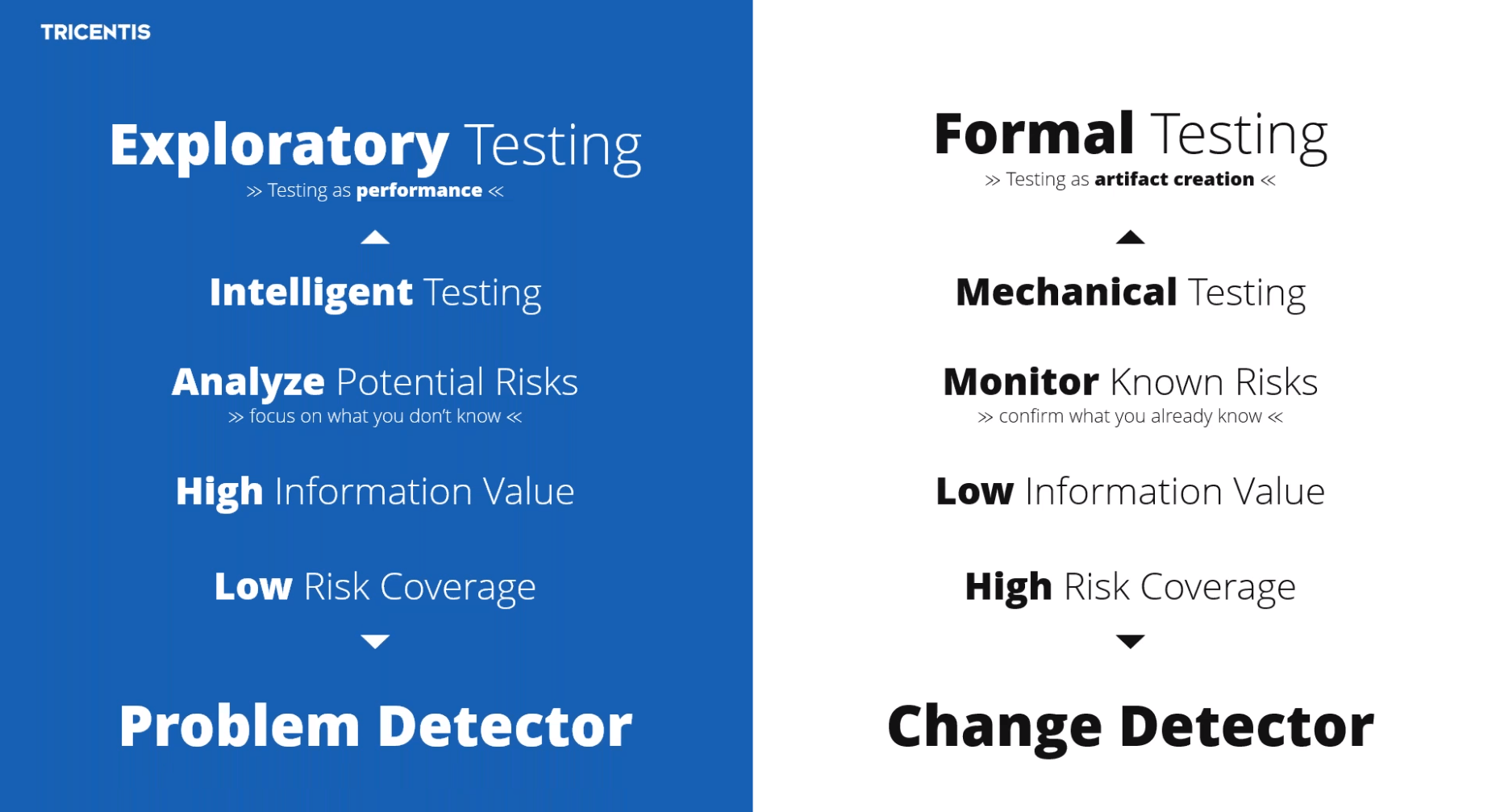 Exploratory testing is probably the fastest and most efficient way of finding issues in software products, but it's not the only way nor just doing whatever you want.

Exploratory testing is to traditional testing what agile is to waterfall, it cuts the time taken to prepare yourself for testing to almost zero since in exploratory testing you simultaneously design and execute the tests.

When doing exploratory testing you should:

Sometimes, all of the above is planned via an exploratory testing charter. Other people really like using mind maps. In any case, the whole point is in investigating and freely exploring what you have set out to test. You will need to find out which test planning method works best for you.

How do other companies do testing?