The most exciting phrase to hear in science, the one that heralds discoveries, is not ‘Eureka!’ but ‘Now that’s funny'...

Why is prerelease testing an important part of the release process?

To ensure the quality of our products we need to make sure that newly developed features did not disrupt old ones and that old ones still work as expected. Because of that, before every release, it is crucially important to do a regression test and confirm that both newly developed and old features work in the best way possible.

Things that should be done before you even start testing

Whether it is a release of mobile or web apps, make sure all features are merged in the release candidate build and that the respective backend features are deployed to your test environment. Once this is done, you can start doing your magic.

Preparation is the key!

TIP: Name your test execution as specific as possible - it will be easier for you to find it later. :) For example, name the release version and platform on which you are performing the regression test, you can also add a name (ticket number) of the test plan if it is available.

There is no silver bullet when it comes to choosing devices for your regression test. The first step would be to find out all the supported devices and the minimum supported version of OS.

The ideal would be to do a regression test on all of them but most of the time it is not possible because of limited time for testing.

The best practice would be to check which mobile devices are used the most and pick the two most common ones. Also, make sure that one of the devices has the most used OS and another one the minimum supported OS version.

If you have some extra time, you can do at least a smoke test on some other supported/most used devices.

TIP: Mix it up - don't use the same devices from regression test to regression test. In that way, you'll be covering more of the spectrum each time you do it.

As it mostly takes a few hours, or even a few days to do a regression test, a good practice is to open a dedicated task for it. This way, everybody from the project team knows what you are working on during a sprint. As you have to dedicate some time for the regression test, you can give a time estimate for that task, and include it into the sprint plan.

Along with the time estimate, you can include some basic info in the task:

Besides regression tests, you can open tasks for smoke and other types of tests as well. Especially when they take a considerable amount of time to be finished.

Sneak peek how a typical test execution looks like in TestRail: 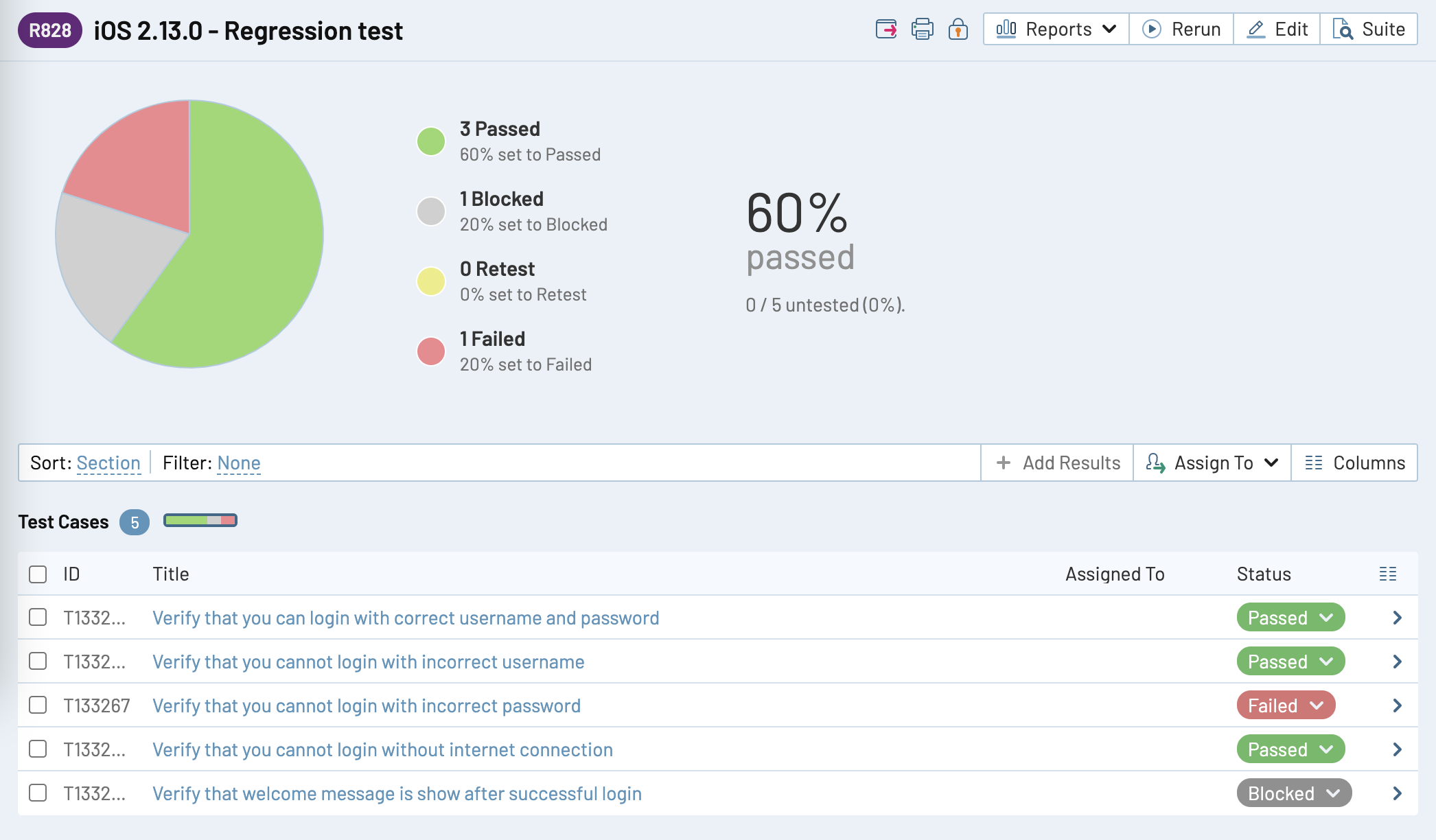 At the top, there is an overview with this fancy pie chart that shows your progress (how many test cases passed, failed, are blocked...) and underneath are test cases. Pay attention to the naming of the regression test and used devices :)

Pro Tip 1: Communicate all the way

Keep informing the project team of your progress in daily meetings or via Slack. Let them know if you have any problems, you need help or you just need more time to finish your testing.

Pro Tip 2: Do not complicate things too much

Don't go too deep into all the features, optimize testing in a way to touch all areas of the app but also focus on those features that are truly critical and/or have been affected by the new release.

Pro Tip 3: Rely on your instincts

Make exploratory testing part of your regression test. The test cases themselves are a great guide, but you should rely on your instinct as well.

The app should not go to production before you went through all test cases in your test execution. After that, you will have a good app overview and if it is good enough for release or not.

What to do after testing?

Once all blockers are fixed and the app is ready for release, share and discuss the test results with your team. Type down a short report and share it in the project group via Slack (or email) or use your daily meetings to do so.

Most of the tools (such as Jira and TestRail) have the option to create test report documents in PDF format. This comes in handy when you need to share a report with a client. Here is just an example of how a generated report from TestRail looks like:

One more thing that you can do is organize a testing session. More about the event can be read here.

The app will be submitted to its respective store and once approved, it will be released to a limited part of the audience (phased/staged release) or it can be released to all users at once.

Just because you finished testing does not mean that your job is done. In the period after the production release, here is what you need to do:

Houston, we have a... crash

Stop the phased/staged release in case of crash spikes. In that case, the team needs to work on a hotfix build and the whole prerelease process needs to be repeated.

Google Play Beta/TestFlight testing is used so that limited (invited) users can test applications in the production environment.

Once the app is available for installation on Google Play Beta/TestFlight, you need to do the following:

What’s the difference between an internal, closed, and open test on Google Play?

Before you release your app to production, you can create releases on three testing tracks: internal, closed and open. Each of them can help you gather the feedback you need to make improvements to your app throughout its development and/or before the release to production.

In order to join a test, users need a Google Account (@gmail.com) or a Google Workspace account.

When you create an internal test, you can immediately release your app to your internal testers (up to 100 testers for initial quality assurance checks). This can help you identify issues and receive feedback earlier in your development process.

It is recommended running an internal test before releasing your app to the closed or open tracks. If needed, you can run internal tests concurrently with closed and open tests for different versions of your app.

Tip: You can also use internal testing to test apps that are not fully configured.

Create a closed testing release to test prerelease versions of your app with a wider set of testers to gather more targeted feedback. Once you've tested with a smaller group of colleagues or trusted users, you can expand your test to an open release. On your Closed testing page, an alpha track will be available as your initial closed test. If needed, you can also create and name additional closed tracks.

If you’re testing an existing app that you've published before, only users in your test group will receive an update for your closed version.

Create an open testing release to run a test with a large group and surface your app's test version on Google Play. If you run an open test, anyone can join your testing program and submit private feedback to you. Make sure your app is ready to be visible on Google Play before choosing this option.

If you set up an open test, users can find your test app on Google Play. You can also share a URL link on a website or email. Every user with the link can access the open test.

The information was retrieved from the Play Console support page where you can find out more about Google Play test tracks.

You can enroll up to 100 members of your team. In order to join the group, they have to hold the Account Holder, Admin, App Manager, Developer, or Marketing role as beta testers.

By using external testers and groups, you can invite up to 10,000 external testers using their email addresses or by creating and sharing a public link. Anyone with the link will be able to download and test your app.

If you want to find out more about TestFlight testing tracks, check out this page.

Since most of the things that are mentioned in the Mobile Apps part are applicable for Web Apps, there is no need to write it all again but we will mention only differences.

Not applicable for Web Apps: