When do merge conflicts occur?

A conflict arises when git is unable to automatically merge changes between two commits.

How to recognize conflicted files?

When a conflict occurs, you will immediately notice a conflict message in the terminal.

The conflicted file will also be marked red in the project view. When you open the file, you will notice additional lines in the file. 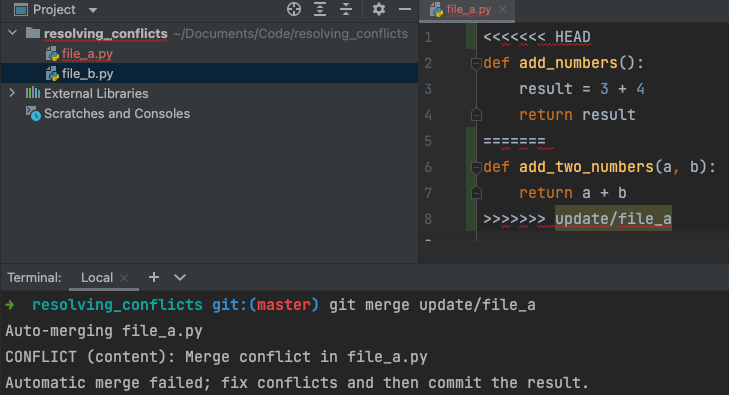 How to resolve conflicts?

There are a few ways to resolve conflicts. The easiest one is to open the conflicted file through a text editor or an IDE and make the necessary changes.

When resolving conflicted files, there are multiple approaches. Depending on how complicated the conflict is, you might prefer to use one over the other.

The most straightforward approach.

Nice and easy if there is a minor conflict. In case of multiple conflicted files or lines in a large file, it might get confusing.

Use this approach if there are quite a few changes throughout the entire file, and you want to cherry-pick changes from both branches.

Once you resolved all the conflicts, you are still not done. First make sure everything is in order, then commit and push the changes. 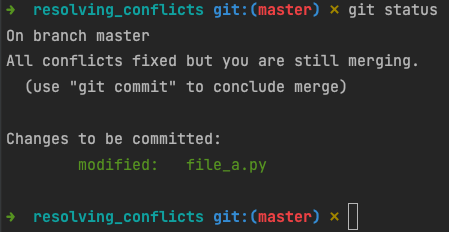 When using a VCS like GitHub or Bitbucket, you will see a warning after opening a pull request in case of a conflict. If that happens, fix the code on your machine and push the changes. Once you are done, if everything is ok, the warning should be gone.