If you ever made a website, it probably contained some assets like images, CSS and JavaScript. In order for a page to be fast, it’s a good idea to concatenate all your JavaScript assets into one file and all your CSS assets into another. Caching might also be tricky… 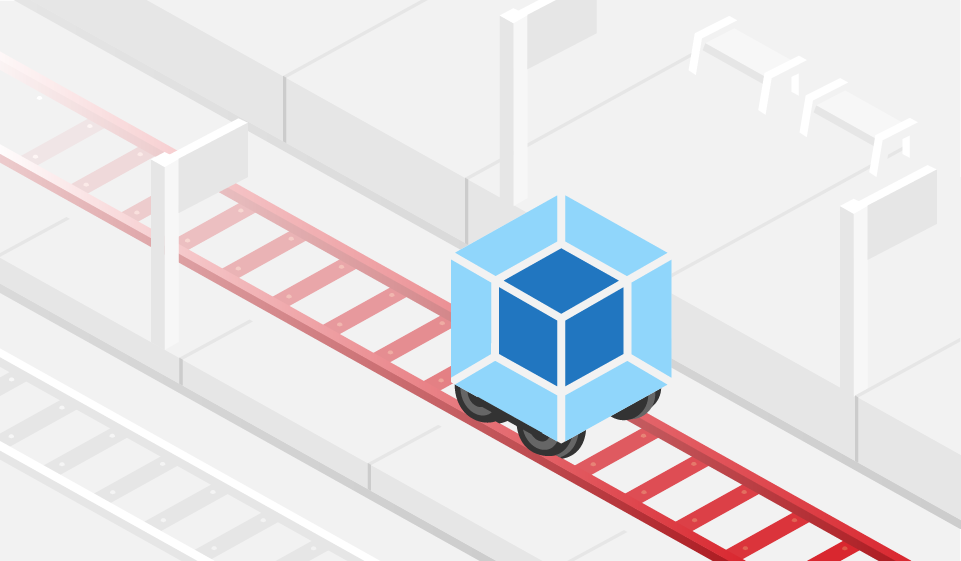 If you want to concatenate files, use SASS or make sure your files are not cached when they shouldn’t be, you’ll need to use a tool that will take care of that. Most web frameworks have tools that work out of the box, but that might not be good enough for everyone.

The asset pipeline is Rails’ way of preparing files for production. Other frameworks might use different names for it, but they all mostly do the same thing. 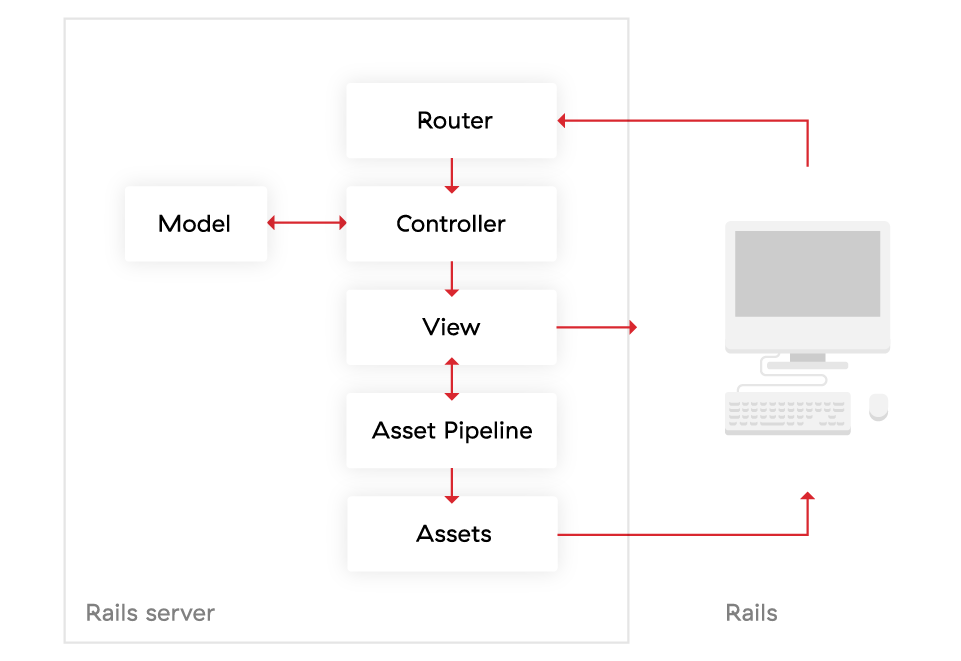 A module bundler does a similar thing, but it is generally more flexible. The final product (files) might be similar, but it does more things in between.

Webpack is a module bundler that is getting more popular day by day. Although this is mostly because of the React community, it gained a lot traction in other communities, e.g. the Angular 2 CLI also switched to Webpack recently. The reason why it's so popular is that it's very fast and extendable. Therefore, it can be adapted to a lot of different use-cases.

Here are some things that Webpack can do with very little configuration that would be impossible or very hard in the Rails asset pipeline:

Webpack handles assets in a different way, which might be weird at first, but is very powerful. Your application has only one entry point (in most cases this will be a JavaScript file), and from there, you can require all other files as you need them. You can include other JavaScript files, but also CSS, JPG, PNG, or any other format you want. The important thing is to define a loader for a specific file format, and you're good to go.

What is out there

When we decided to use Webpack with Rails, we looked at the available options and tried a few. Although they were good, none of them covered all our use cases:

It was announced a few weeks ago that Rails 5.1 will get an official (but experimental) support for Webpack. The release date for Rails 5.1 is still unknown. Given that Rails 5 was released in June, and the current progress of 5.1 is just above 50%, it might still be a while before you'll be able to use it.

Our approach was simple - find a common ground for communication between Webpack and Rails. With this approach, we're avoiding the tight coupling - Rails doesn't know much about Webpack, and Webpack doesn't know a lot about Rails. There are two parts of the solution:

Webpack will be responsible for all the assets in the project. Since it will also add fingerprints to the files, we'll need to let Rails know what the new files are, and to which folders they're saved. To make this part simple, we created webpack-asset-pipeline. The plugin will intercept all requires and imports from your JS and CSS and add them to the manifest JSON file:

When you run Webpack, the plugin will create a manifest.json file that will contain all the asset mappings.

An example of JavaScript code with requires:

The mappings you'll get in the manifest file:

To run Webpack on every relevant file change (for development), you should run it with the --watch flag:

The only thing Ruby on Rails needs to do is to replace the assets helpers. This can be done in one of two ways (depending on your preferences). In both cases, you should remove Rails sprockets because they will not be used, and you won’t be able to use their methods by mistake. The easiest way to do this is with the following command when you’re creating your app:

You'll need a helper to replace the asset pipeline. Here is an example of how you can do this:

An example how to use the helper:

You'll need to add the main JavaScript file to your layout with this helper. Also, keep in mind that you shouldn't use Rails image_tag, stylesheet_link_tag or javascript_include_tag helpers.

The second solution means a little more work in the start, but your application code will stay the same. Although removing sprockets is optional in the first method, in this case you have to remove them. The code for monkey patching is available in the plugin documentation.

After you're done with monkey patching, you'll be able to use the assets in the same way you used the asset pipeline: 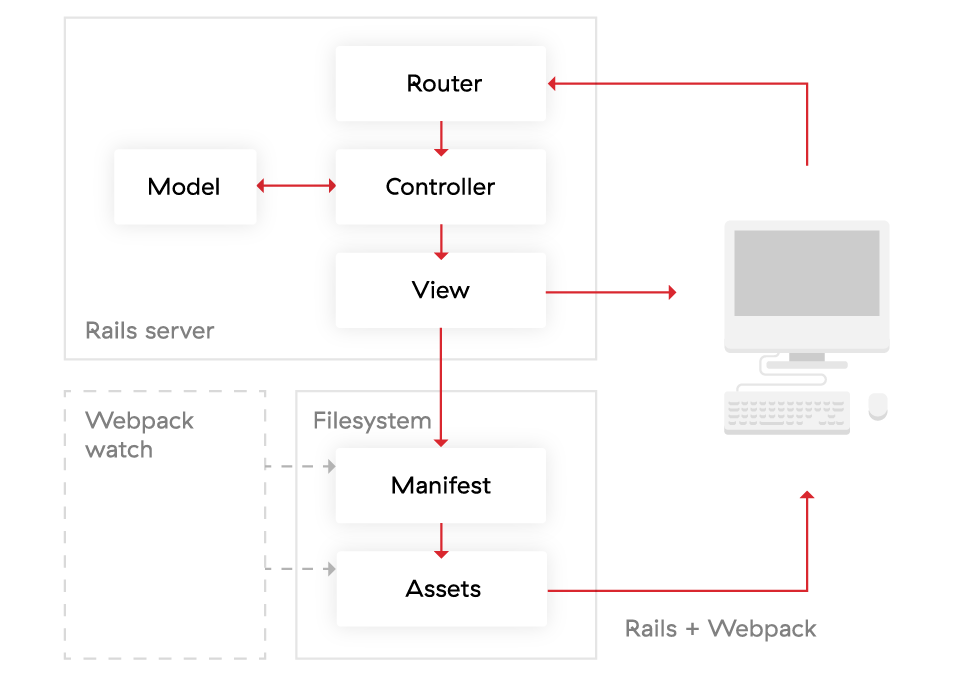 Updated flow in combination with Webpack

To use hot reloading, all assets will need to be served from the Webpack server. To work correctly with the rest of the setup, you'll need to proxy the rest through the Webpack server to your original app server. For that, you can use webpack-dev-server, or if you need more control, webpack-dev-middleware in combination with express. An example of how to configure the webpack-dev-middleware to enable CSS hot reloading is available in the webpack-express-dev-server-boilerplate.

You'll also need to set the writeToFileEmit property in webpack-asset-pipeline to true to ensure the manifest is saved to disk and therefore accessible by the app server. 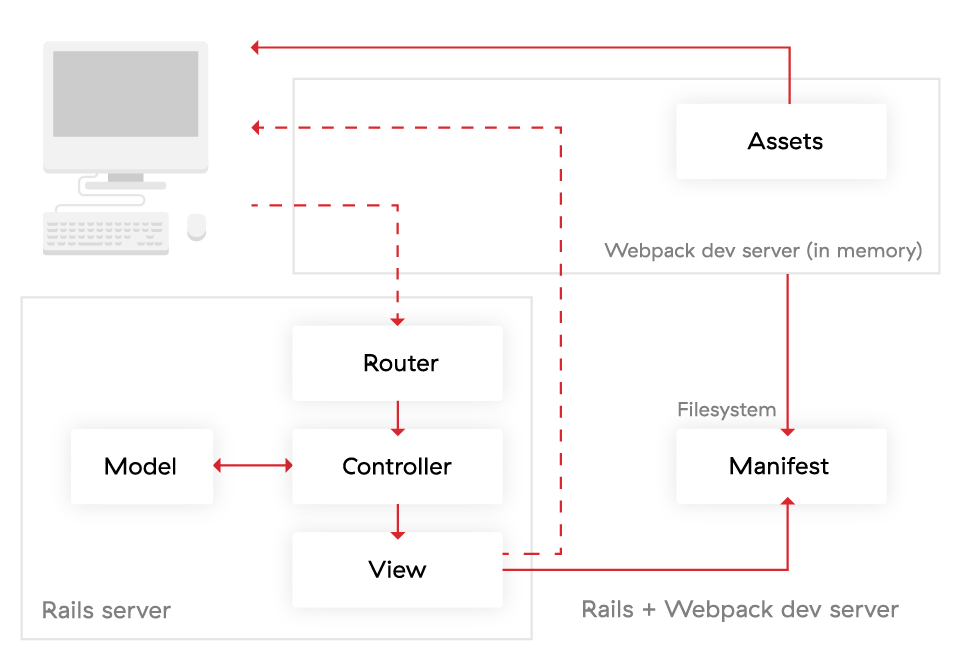 There are still some issues we didn't solve, but they're just features that are nice to have - nothing essential:

Since both Webpack and Rails have their servers or watch commands, we’ll need to run them both at the same time. We can do this either by having two terminals running the processes or by using something like the foreman gem.

A great thing about Webpack is that it only processes those files that are explicitly referenced in JavaScript or CSS. That works great as long as you don’t need the assets somewhere else (e.g. in Rails). If you need an asset in Rails, but not in JS/CSS, you’ll still need to require the file in JS so Webpack will know it has to process it. The best way to do this is to have a separate JS file where you require all the assets that are used in Rails, but not in JS/CSS.

What if I'm using some other framework instead of Rails?

You might not be using Rails on your projects, but the plugin could work just as well with other server-side frameworks like Laravel, Django, Spring or ASP.NET MVC - the only thing you'll need to do yourself is write the helper that will be used to fetch the asset names from the manifest file.

We're looking to cover as many platforms as possible, so if you created helpers for your framework, you can send us a pull request with instructions on how to set it up. I'm sure others will appreciate it.

Darko Kukovec
—
January 24th, 2017
Read more about
Ruby on RailsJavaScriptProgramming
Hungry for more JavaScript news?
Subscribe to our weekly #FrontendCookies newsletter.
Keep reading our blog
Domagoj V.
—
7 min read
How to Use React Hooks in Class Components
What can you do if you want to use Hooks logic inside a class component, but there's no...
Darko K.
—
6 min read
Hey Google, I/O 2019 Was a Big Deal for Web Development
Web is an open place and many people and companies collaborate in moving it forward, but the...
Domagoj K.
—
6 min read
I Cheated on Android with JavaScript... And My Boss Approved
I fell in love with mobile development five years ago. I loved the excitement of working on an...
View all posts