Swift is gaining popularity each day. If you're starting a new project, chances are that you'll decide to write it in Swift. To make the transition easier for you and save you the time you would spend writing certain components for your app, here are 10 libraries that we think every iOS developer should know about!

Just like we mentioned in our Top 5 iOS libraries every iOS developer should know about article, GitHub and Bitbucket are great places to find open source iOS libraries. Tools like CocoaPods and Carthage can help you speed up installing and maintaining libraries you use in your projects, and in that way make project dependency management easy for you. 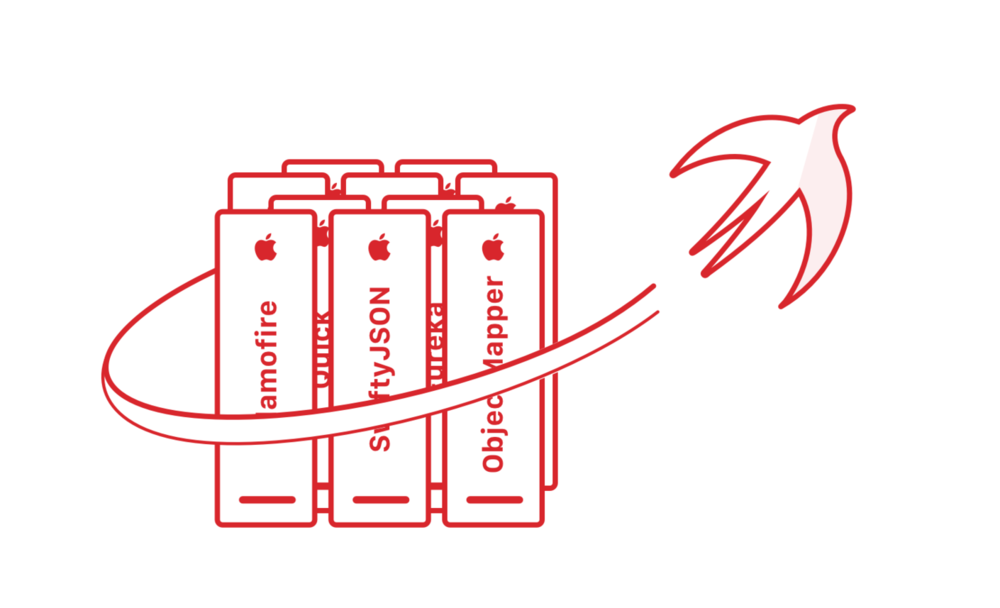 When you want to abstract away and simplify networking in your app, Alamofire is the way to go. Alamofire is a HTTP networking library, built on top of NSURLSession and the Foundation URL Loading System. It nicely wraps networking mechanisms in an elegant and simple Swift interface.

Explicit types in Swift make sure that we don't make mistakes in our code and cause bugs because of them. But sometimes it is rather painful to deal with it, especially when working with JSON. Luckily, SwiftyJSON is here to help us deal with JSON data in Swift in a more readable way. Optional unwrapping is handled automatically for you as well!

If you've ever written an app which downloads information via an API, you've probably spent a lot of time writing a code to map a response to your objects. ObjectMapper helps you convert a JSON response into your model object, and vice versa. In other words, it helps you map JSON to objects, and objects back to JSON. Nested objects are supported as well.

It's also worth to mention AlamofireObjectMapper, an Alamofire extension which converts JSON response data into Swift objects when using ObjectMapper.

Quick is a behavior-driven development framework for Swift, inspired by RSpec, Specta, and Ginkgo. Quick comes with Nimble, which is a matcher framework for your tests.

Eureka helps you write dynamic table-view forms in a simple and elegant way. It consists of rows, sections and forms. If your app contains a lot of forms, Eureka proves to be a real time-saver.

RxSwift is a Swift framework for Functional Reactive Programming. To be more specific, RxSwift is a Swift version of Rx and its goal is to enable easy composition of asynchronous operations and event/data streams. KVO observing, async operations and delegates are all unified under abstraction of sequence, which makes RxSwift such a powerful framework. If you've ever worked with ReactiveCocoa, you are familiar with the concept.

SnapKit is an Auto Layout library that simplifies writing auto layout in code with a minimal amount of code needed without losing readability. It is type safe by design to help you avoid programming errors while coding your user interface.

CoreStore is a wrapper library for Core Data. Its goal is to provide type safety and elegance of Swift when interacting with Core Data. CoreStore's API provides all common methods to effectively interact with your database.

You don't agree with us? Some other library deserves a place in this top 10 list? Leave a comment and let us know what you think!

Vedran Burojević
—
December 10th, 2015
Read more about
ToolsiOSSwiftLearning
Hungry for more iOS-related news?
Subscribe to our weekly #iOSCocoaTreats newsletter.
Keep reading our blog
Goran B.
—
10 min read
Top 10 Most Useful iOS Libraries in 2020
A 2020 list of the top 10 libraries every iOS developer should know about, fresh off the press.
Hrvoje H.
—
18 min read
Still Using NSNotificationCenter? Try These Alternatives
Connecting distant modules in your iOS app with NSNotificationCenter might not be the best way.
Vedran B.
—
6 min read
Becoming an iOS Developer
When I first tried out my new iPhone, I was instantly curious about how everything worked on it....
View all posts