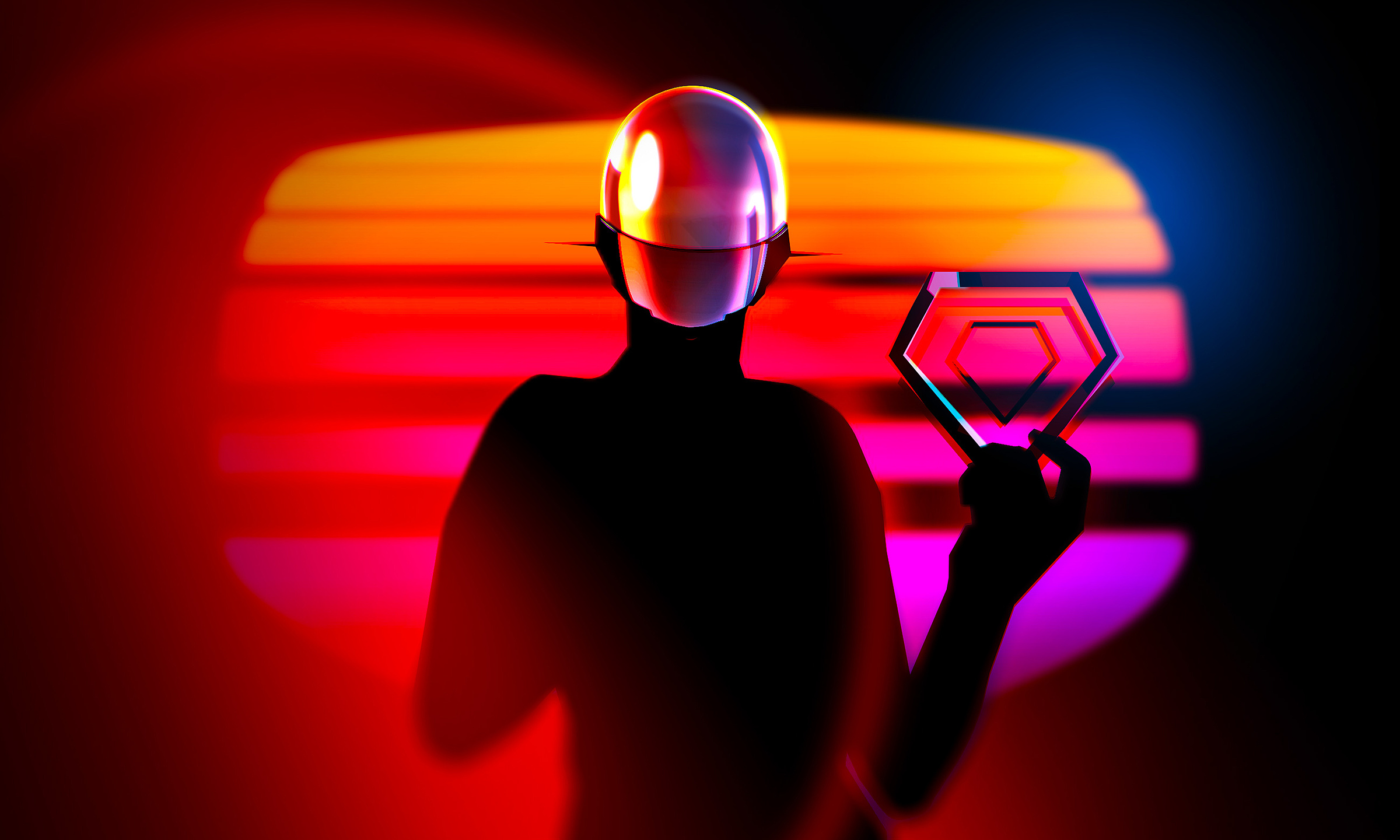 Modern code reviews are considered a key component in the development lifecycle of any IT organization.

Yearly case studies performed by various researchers report that it’s one of the main methods for improving code quality, sharing knowledge across the team, increased collaboration as well as greater adherence to coding standards.

Unlike Fagan’s code inspection design introduced in 1976, most of us employ a more lenient process, which is:

Results from multiple analysis have shown that the latent defect discovery rate is about 30% in case of informal reviews, proving them to be very effective. They are also a great source of knowledge, because the process usually entails multiple developers collectively looking at a problem and the possible solution.

However, code reviews can become quite cumbersome for newcomers, especially if you find yourself in a company that has some tribal knowledge, which is usually the case. 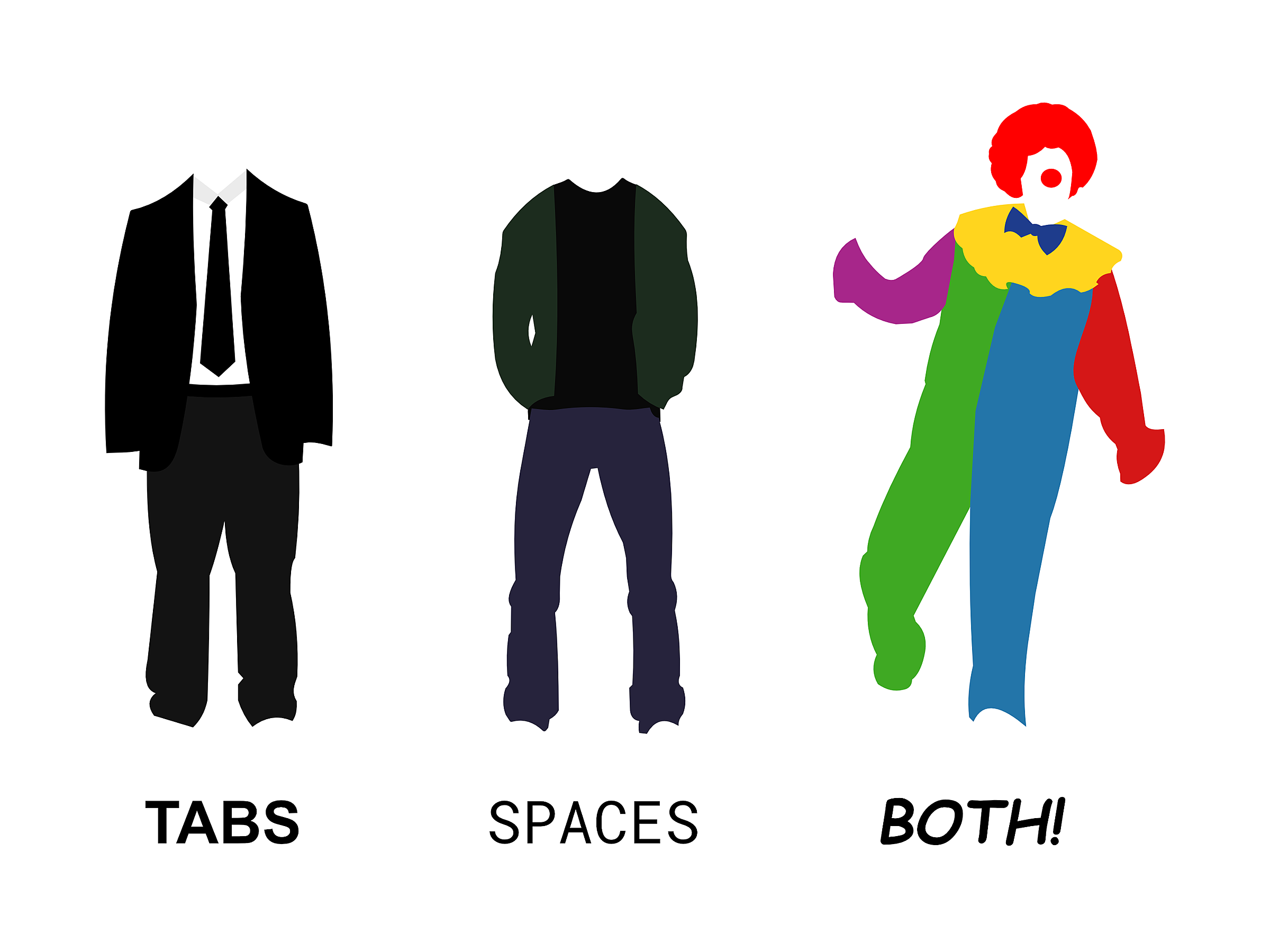 Tribal knowledge is any unwritten form of how a process should work, or in our specific case, how to produce code. And there can be quite a lot of it, spanning from syntax preferences to unwritten rules and established conventions, which in turn results in code reviews containing dozens of comments that could have been avoided.

That kind of noise takes a lot of focus from the business logic and design. It further elongates the code review process as each back and forth takes additional time due to the asynchronous nature of the process.

A solution to this problem are linters and if you chose Ruby as your programming language, chances are high that you already used RuboCop.

Linters are tools used during development that warn the programmer about formatting and adhering to a set of rules.

The warnings are usually related to syntax, but the Ruby community went a step further and introduced a couple of behavioral ones like rubocop-rails that can even spot unwanted behaviour for you.

If you think about it, why wouldn’t you want automatic warnings when you introduce a bug...before the code is shipped. It sounds amazing!

A very cool behavioural cop is the Rails/UniqueValidationWithoutIndex, which detects model uniqueness validations and checks if the uniqueness constraints are also set on the database level. In the following example you can see how the warning looks like if you forget to add the unique index during database migrations.

This concept opens up a lot of ideas and opportunities for a company to create a code convention template that is shared throughout all projects. This increases technical cohesion on a team level and ensures that everyone is roughly on the same page when it comes to conventions and best practices.

Let’s look at a specific code example in Rails that declares the attribute confirmed_at on a User and it defaults to the current time. The Attributes API provides just what we need:

At first glance, this looks totally fine, but if you don’t write thorough tests, the bug can be hard to catch, even during code reviews. Look at what happens for every new user:

This is a perfect example of tribal knowledge. You either learn to avoid it by breaking production, writing very thorough unit tests or by having someone more experienced mention it during the code review.

Now imagine someone’s watching over your code as you type it, without the awkward presence of course, and giving you real time feedback to avoid such pitfalls. This is exactly what RuboCop’s cops provide us with. In order to be able to build such a layer of protection, you first need to understand how the source code gets converted into data structures.

AST is a tree representation of the written source code. Each node of the tree denotes a piece of the source code, which can be any literal, object, constant or any other construct used in the programming language.

Let’s take a look at some simple examples of Ruby constructs and how their AST looks like.

For this, the parser gem is used. After installing it, you can jump into your terminal and start playing around:

The basic constructs are pretty straightforward. We get a readable description of the code, which tells us that 1 is an integer with value 1, while “1” is a string with value “1”. We can see that this continues to be the case in more complex expressions:

If you haven’t grasped what’s going on, it really helps reading the Ruby code out loud. Take a look at the last example and try reading every bit of Ruby code in the most descriptive way possible. I said it the first time like this:

This is not explicit enough, because I didn’t specify the primitive type of the key (symbol) and value (string) of the elements.

So, let’s investigate the AST of our example:

Looks familiar, doesn’t it? It’s a combination of all the nodes we’ve parsed in the previous examples. Any class that inherits ApplicationRecord or includes the AttributesAPI module can receive the attribute message that accepts 3 arguments:

The AST concept gives us the ability to convert source code into data structures. Now we just need another tool that will traverse the tree and find specific nodes in Ruby using pattern matching, or maybe regular expressions?

Fortunately for us, this problem has also been solved with the Node pattern. It is a DSL for finding specific nodes in the AST using simple strings.

This is the last step before diving into the implementation of a custom cop - finding the right string that will match against a specific AST. Here are some examples of the Ruby code, AST and the pattern. 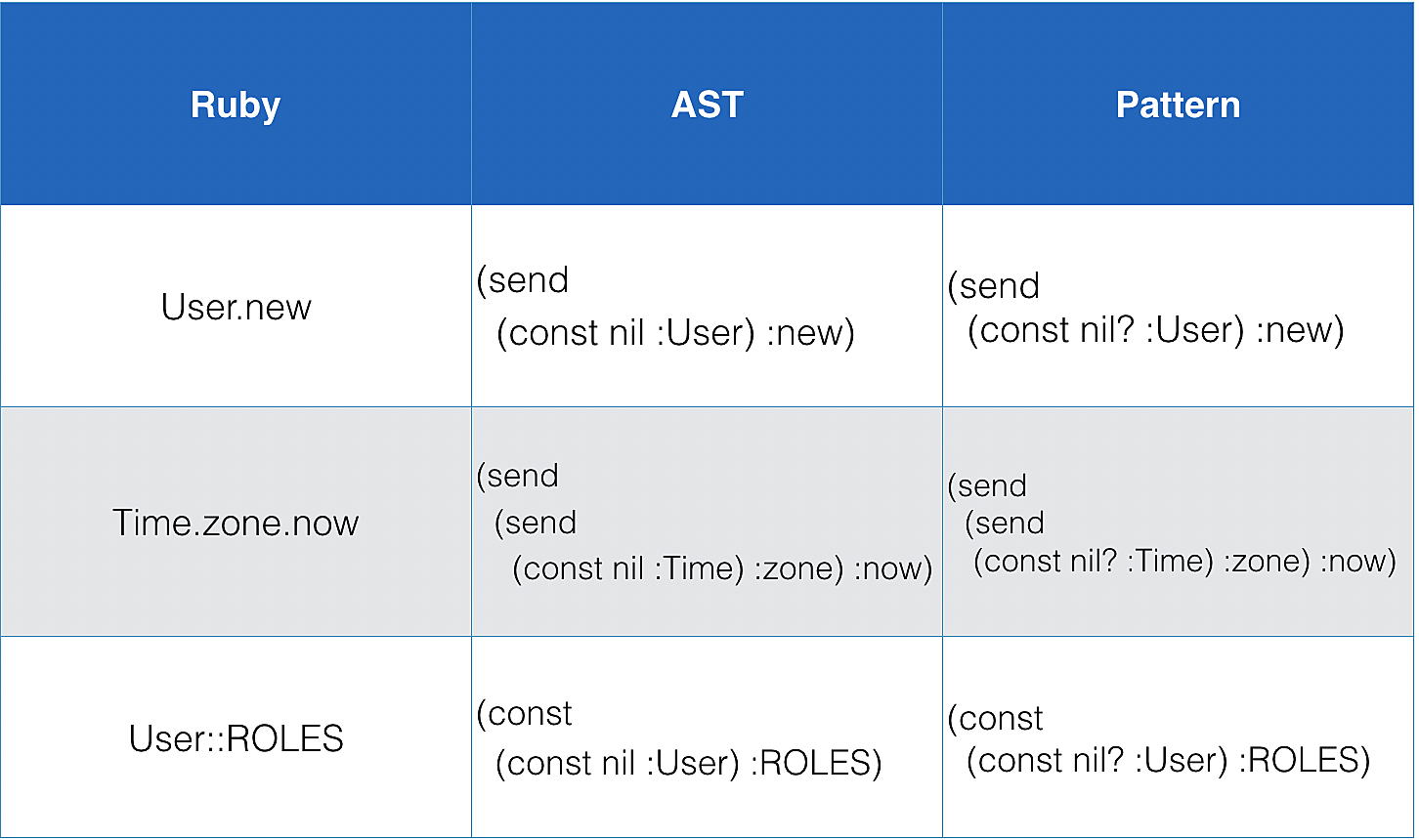 The only real difference between the AST and the pattern is nil?, which is a special case predicate that matches against nil objects. Bear in mind that the goal is to match arbitrary code to these patterns, not just our specific examples in the table. We need to take great care of warning of invalid cases while keeping the valid usages unaffected:

Sandi Metz gave an excellent talk on RailsConf in 2015, where she stated:

You can reveal how things are different, by making them more alike.

By putting this quote to use, we can spot the static nodes in an infinite range of code possibilities and reveal the pattern:

Let’s use the information and write the pattern that would fit the bill for all cases:

At this point you should be confident enough to start writing some code.

We love writing tests, especially when the tests are fast and easy to understand.

RuboCop provides a beautiful DSL for testing cops but unfortunately a lot of articles found online don’t have the information how to set up cop tests. Don’t worry, we’ve got you covered this time!

Here are some tips for setting up RSpec cop tests:

Make sure RuboCop is in your Gemfile and bundled up.

Include it globally or specific category of tests (eg. type: :cop):

The ExpectOffense module provides us with a beautiful way of writing clear and descriptive cop tests. They resemble the actual Ruby code you’re trying to cover:

Now we can create the cop:

RuboCop::Cop::Cop provides a bunch of stuff that’s used in all class instance cops.

The def_node_matcher method is used for matching nodes. It requires the name of the matcher and the matching pattern. In the example above I used matcher chaining, but you can just as easily use one matcher with the AST that was defined at the end of the previous chapter:

Callback methods (on_send, on_block, on_class etc...) check whether a node is matched against a pattern. You know what callback to use from the first node AST, which in our case is send. We used def on_send(node).

Inside of the callback methods you usually start off with the matcher name defined in def_node_matcher in order to get the offending construct. When calling default_attribute(node), you get an instance of a type of RuboCop::AST::Node that knows its type and node children, alongside other things.

The add_offense method provides an easy way of adding a warning message, defining the error positioning (^^^) and the severity of the error:

I advise you to look at the RuboCop source code, because it’s really nicely documented and there’s a lot of examples for learning. The rest is just...Ruby.

Lastly, include your new cop in .rubocop.yml.

Upon reopening or changing a file, you should see the new cop in action.

Code reviews are important and the discussions should focus on strategies used to solve the domain specific problem, finding edge cases and pointing out possible design or test improvements. They should have a minimum number of comments related to project conventions, as well as company code conventions, typos or syntax errors.

Having a quick feedback loop in your IDE enables all of that, while being much more effective time wise than PR reviews.

Another benefit is the feeling of accomplishment when your custom cop gets recognized as useful and gets promoted from a project-specific cop to a company-specific one. Maybe it will even get merged with the other cops to serve and protect codebases all around the world.

We use RuboCop at Infinum and have only started down this road, but we see a lot of benefits. Having cleaner pull requests, automated knowledge sharing and being able to engage with open source software makes it a no-brainer.

The Ruby community is one of the nicest programming-language related communities out there and we should all actively search for ways to improve it and help other fellow developers write good, clean code.

All evidence taken into account, we consider Marko Kršul guilty of making the cover illustration.

Marko Ćilimković
—
December 11th, 2020
Read more about
Code ReviewRubyRuby on RailsTools
Hungry for more Ruby and Rails news?
Subscribe to our weekly #RubyDrops newsletter.
Keep reading our blog
Nikola B.
—
10 min read
Here to Stay Analyzing RubyGems Stats for 2018
As years go by, there is always a question whether Ruby is dead or alive, and as usual, we have...
Damir S.
—
5 min read
Top 8 Tools for Ruby on Rails Code Optimization and Cleanup
Keeping your code clean and organized while developing a large Rails application can be quite a...
Damir S.
—
3 min read
Simple Ruby on Rails Content Editing
When your client asks for some copy editing on their website, does it take too much of your time?...
View all posts