On June 9th, we concluded the third season of our tech talks called Infinum Android Talks. We were blown away by the turnout for the last event. More than 100 people showed up and our chill area was packed. It was our most successful season with an average of 70 people per event.

How we got to this point, and more importantly, why? We'd like to share our experiences and a few tips on making event management successful.

A small room full of people

Three years ago there were only six people in our Android team. Each one of us involved in interesting projects, working full-time on Android and learning a bunch of stuff along the way. Apart from the occasional "Eureka" moment when we'd share our happiness and progress with the team, there was no systematic knowledge exchange among us. We didn’t really share our learnings.

At a certain point, we realized we needed to change that, so we started organizing internal meetings where we would talk about things we’ve done and what we’ve learned. Six of us crammed in a small room and it was basically a discussion about Git Flow and Android development in general. I remember ranting about how Eclipse is shit and why we should all switch to Android Studio. 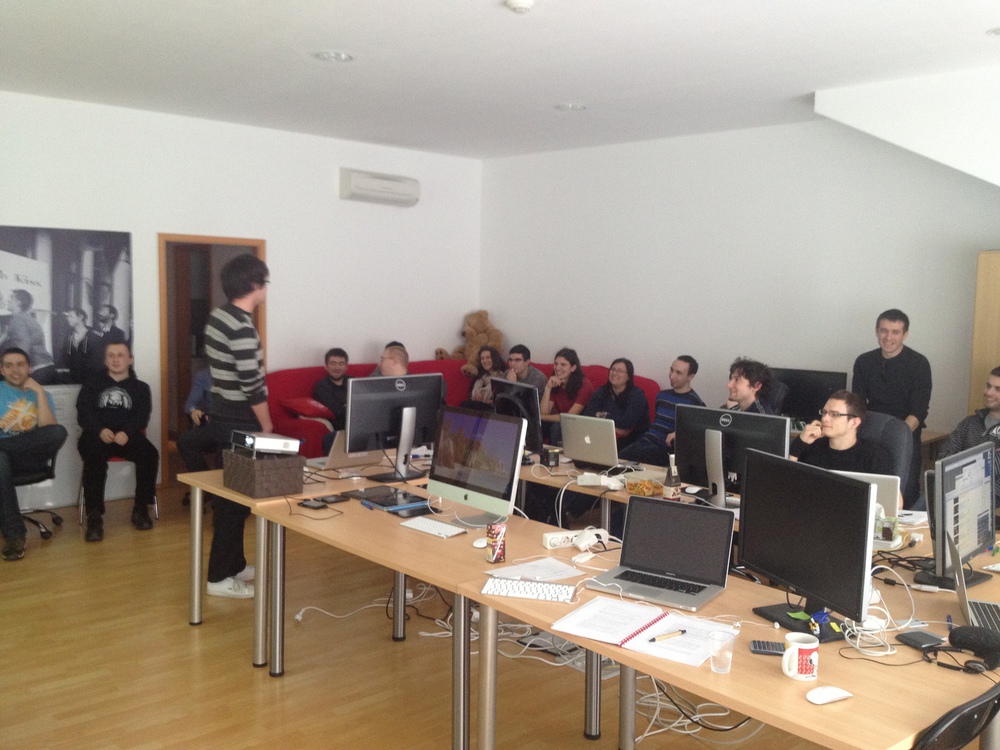 It became apparent that the knowledge we shared would also be useful for new colleagues, and possibly the community at large, so we decided to stream our second meeting via Google Hangouts. We spontaneously shared the link to a bunch of friends to get the ball rolling.

Soon thereafter, we realized quite a few people started following us. We got a bunch of amazing feedback, but there was one particular request that stood out. “Can we join you in the office?”, some people were persistent. Although we really liked the idea, there was simply no room. As soon as we moved into our new, bigger office, we decided to open up the event for everyone.

The glory and pitfalls of event management

Last three years were a bumpy ride mixed with both success and failure. We’ve learned a lot, and during this natural progression we came up with a rulebook on how to be successful in event management. 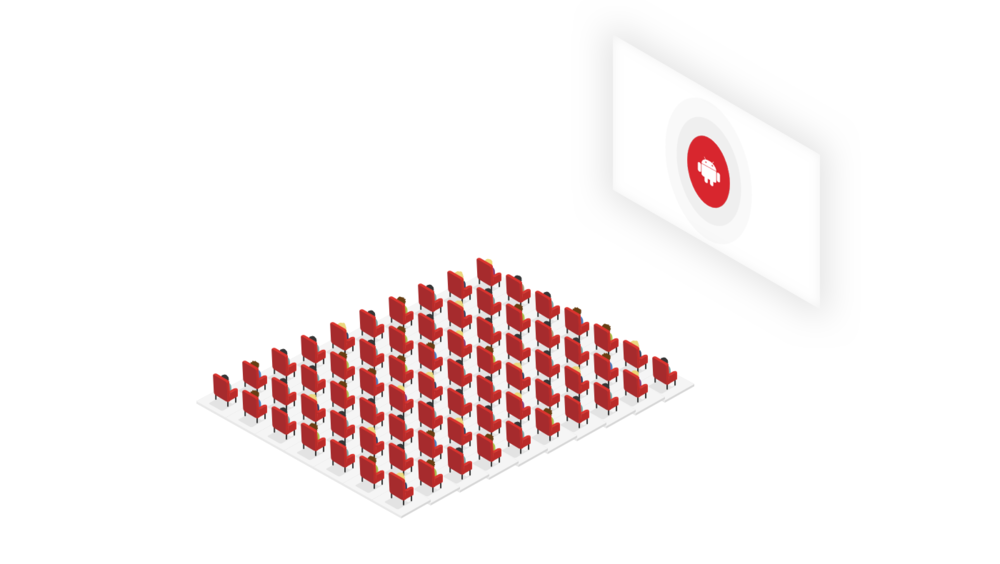 Praise for the manager

With a group of people, the responsibility often shifts and things are rarely done on time, so it’s important to have a dedicated person for event planning. This person has to keep an eye on everything, from booking a venue a place to preparing the lecturers.

A goal without a plan is just a wish

In my experience, the two biggest challenges when organizing a regular meetup are:

Having 100 excellent developers is no guarantee they’ll come up with 100 ideas. The tendency to avoid public speaking doesn’t help either. Even if they come up with something cool, they’d rather not talk about it in front of a large crowd. This is where the event manager jumps in. They should be able to derive interesting tidbits from ongoing projects.

If there’s something worth talking about, it should be added to the agenda for the upcoming event.

It took us some time to realize, but good marketing and sticking to the schedule are the best things you can do for your meetup. People have a busy schedule and they usually plan ahead. Just think of your favorite TV show. If you are a fan of the Game of Thrones, then your Sunday nights are reserved. Events are no different, if you organize them regularly, your audience will be accustomed to the schedule.

Announce the event at least two weeks before and share the agenda. Promote your event through your website, newsletters, Facebook and Meetup groups. Be aware of your target audience and where to advertise. We always share our events with student communities and even with the competitors. We know they’re interested in our event and it helps us build followership.

Don’t forget to take a few pictures and share them on social media. Tag a few people and their friends will see it on their feeds.

Your colleagues can be the best at what they do, but knowing something and being able to convey that knowledge to others is not the same. Prepping up is essential and you as the event manager have to facilitate that.

In our case, speakers usually prepare by presenting to their colleagues. Experience has taught us that knowing your deck pays off. With well-prepared lectures, the event looks way more professional.

It doesn’t matter whether your audience is programmers or swimsuit models, everyone appreciates snacks and drinks. Provide those because

The colleagues who organize our Infinum iOS talks sometimes order pizza after the lectures. It obviously proved to be a good idea. Everybody loves pizza, right?

Invite other companies to participate

Do not be all like "We are the best, beep the rest". Invite people from other companies to hold a lecture at your event. They will provide a different point of view. The main point is not to brag, but to share knowledge. Most of them will be happy to join you. If your event grows large enough, other companies will come to advertise themselves and try to headhunt new recruits.

From our experience, organizing a live stream is not an easy job. We tried using Google Hangouts and were very dissatisfied. We had a lot of stuff to do in order to set everything up and had to dedicate a person which will be on hold in case anything goes wrong. Something went wrong every single time. The video quality was bad, we had regular disconnection issues and the sound was awful. Because of all that, we decided to drop the live stream.

What has turned out to be a great alternative to live streaming is recording your lectures and uploading them to Youtube. We use QuickTime to record the presenter’s screen and audio. Afterward, our designers add intro animations and we are ready for publication. Check out our videos on Infinum Youtube channel.

Our plans for the future 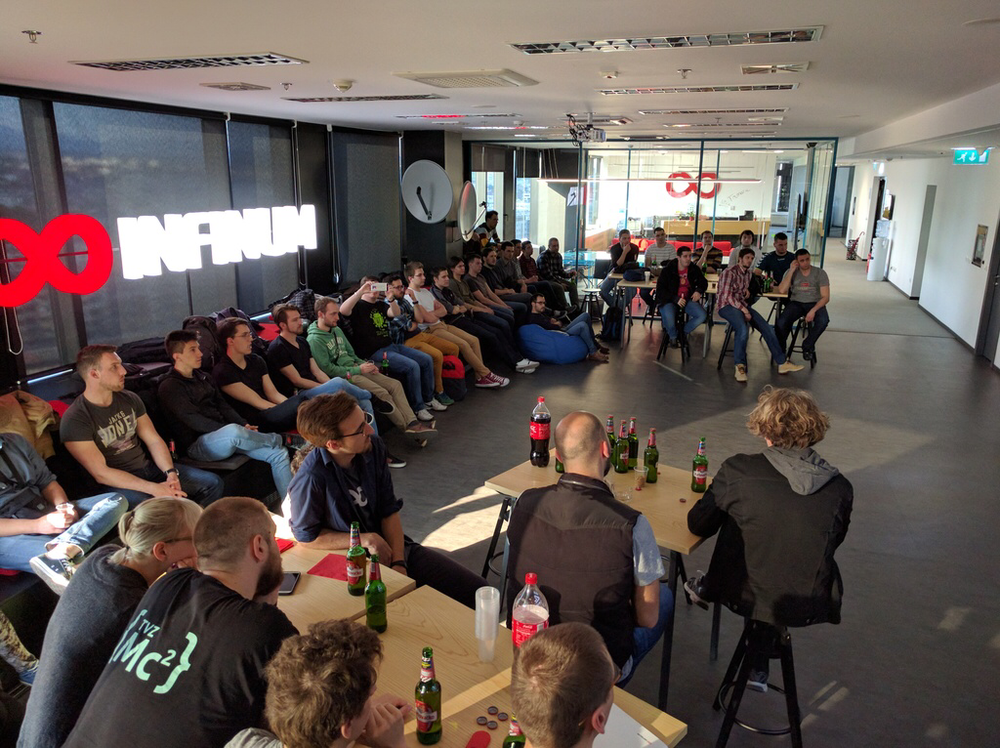 It took us three years to reach 100+ people, but it was a fun and rewarding journey. We grew to a team of 18 developers and we're always brainstorming on how to enrich our program, so during our last event, we organized a first time ever open table discussion. We had people from four mobile development companies join us and discuss best practices in Android development. It was a great addition and we’re definitely moving forward with this in the future.

The next season of Infinum Android Talks will start this fall and unlike Game of Thrones, it will be better than the previous one. We have a few more ideas in the pipeline and we are eagerly waiting to roll them out.

The first change is already here. We have redesigned our talks section and now it is easier than ever to browse through all our Android and iOS talks.

Keep reading our blog
Marko V.
—
6 min read
Becoming an Android Developer
Android, Android, Android... It's everywhere - smartphones, watches, tablets, TVs... Android...
Dunja Š.
—
5 min read
Why Developers Should Be T-shaped People
T-shaped developer is a generalizing specialist – rocks their own field and has general knowledge...
Željko P.
—
2 min read
Infinum Academy Is Feeling SLOVEnia
Ever heard of Henry Ford? Of course, you did. He once said, ‘’Anyone who stops learning is old,...
View all posts