Multiple targets in a project

After these steps, all targets will use the same bridging header.

To avoid multiple names for Objective-C generated interface header name, you should use the same logic as with bridging headers.

In Build Settings, under Objective-C Generated Interface Header Name, you should use common name for every target, for example {Product_Module_Name}-Swift.h.

After adding your first Swift file to the project, some additional flags are going to come up in General project configuration. Some flags are important to you, and they are:

You want to configure both of them so you can use them in Objective-C and Swift codebase.

In order to expose Swift class or methods to Objective-C, you can use different attributes:

This will only work after you build your project.

It is possible to customise the way Swift method or class is represented in Objective-C. If you want to do that, you should use @objc(name) instead just @objc. For example,

In this example, by using @objc(sharedManager), our singleton will be used in Swift files like MyManager.shared, while in Objective-C it will be used [MyManager sharedManager]. It is also possible to rename whole methods and parameters so it can match Objective-C naming style.

Here are some useful information that can help in further development:

To access Swift code in Objective-C codebase, you have to use XCode - generated header file. Header name form is {Product_Module_Name}-Swift.h.

Important: Never include {Product_Module_Name}-Swift.h in any .h file since this can cause cyclic reference.

If you only want to use Swift code in .m file, you should import {Product_Module_Name}-Swift.h in that .m file.

If you need to use Swift code in .h file, you should use something called Forward declaration, which is explained below. 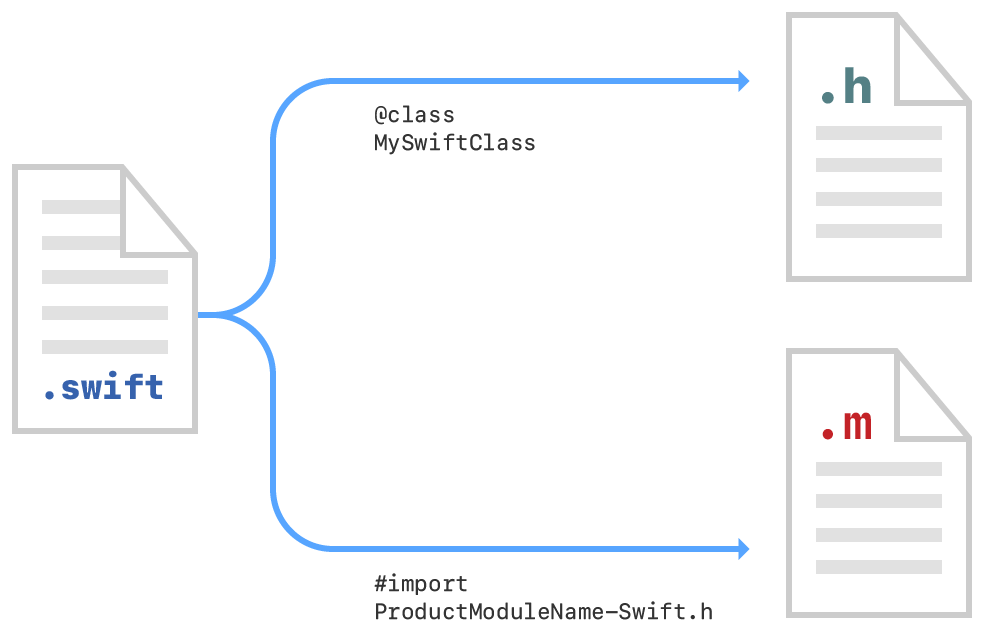 But if your project must have Swift enums in header files, there are two possible solutions:

Although having duplicated code is inherently a bad thing, and it will be more challenging to maintain, using this solution your code will become more flexible and here are the perks that come with it: * You will avoid 'dirtying up' your Swift codebase with Objective-C enums. And by doing this, somewhere in the future when your project won't use Objective-C anymore, you won't have to go through Swift files and refactor them. * If you want to share your code with others, you won't force Swift developers to have support for Objective-C (bridging headers), and their project can remain pure Swift.

Furthermore, here is an example of how to, in some measure, prevent discrepancies between Objective-C and Swift enums if you are using the second solution:

As your application progresses with migration from Objective-C to Swift, number of imports in bridging header file will probably grow, so it is good practice to start separating import statements into logical sections and use markdowns from the start.

To customise how Objective-C is represented in Swift, you can use NS_SWIFT_NAME macro.

Whether you already have Base VIPER in your project written in Objective-C or not, you should add Swift version of Base VIPER which are going to be used for every new module written in Swift.

Since there are differences in BaseWireframe implementations and the way each of them navigates to the next screen, you should add @objc annotation into Swift BaseWireframe as it is shown in the code below to achieve easy navigation from Objective-C module to Swift module.

After you've changed polyglot.yml file, you should fetch translations with polyglot pull.

All language files that were created by Polyglot for the Objective-C should be replaced with Swift files.

Important: If a new language is added to the project, LanguageObjC.swift file should be updated.

Finally, change all instances where you used polyglot translations in .swift files from _(@"...") to Strings.{...}.localized.

Important: To localize your app, you should use this library: https://github.com/infinum/iOS-SwiftI18n

However, there is always a possibility to write your language manager which supports both Swift and Objective-C, and if you do decide to do that, it should look something like this:

Setting up language in Objective-C

To set up your macro which is going to be used throughout Objective-C codebase, you need to expose your LanguageManager to Objective-C.

Colors, Images, Constants, and much more...

It is always important to have a single source of truth in your codebase. For that reason, initialising the same resource on two sides (Swift and Objective-C) is error-prone, since it is easy to forget to update both. Keeping that in mind, the developer can write an Objective-C - visible Swift class to expose Swift structures. An example is shown below:

It is only important to add Objective-C class which you want to test to bridging header file.

Add @objc or @objcMembers in front of the class or function you want to test.