Certificates are a part of the app development process called code signing.

When you registered as a developer for the iOS Developer Program, you were offered an option to create a personal development certificate.

If you haven't created it then, you can do it now. The process is pretty straightforward:

You can find it in the Keychain app in the "My Certificates" section.

The main part of the certificate is your public/private key pair, which is a guarantee that the apps are truly developed/distributed by you.

This is of key importance for app distribution, no matter whether the distribution target is the App Store or in-house.

At Infinum, we have two different Apple Developer Program accounts. One is meant for App Store distribution (Infinum d.o.o), and the other one, the enterprise account (Infinum D.O.O.), for in-house distribution.

To understand provisioning profiles, there are a few more things you should know how to do.

The Bundle ID is created by following the reversed URI convention. For an app named "My App", the Bundle ID could be defined as com.infinum.my-app.

To run the development app on a device, the device should also be added to the developer portal. The Device UDID is an identifier that uniquely identifies the device, just like the App ID identifies apps.

The provisioning profile binds the App ID to the device UDID(s) and Code Signing identity, and enables us to run or install the apps on devices with UDIDs that are added to the developer portal.

When you create a provisioning profile, you're basically associating the iOS devices you have listed in the Provisioning Portal with the certificate signed by Apple in the previous step. The result is a .mobileprovision file that is used during the compilation process of an iOS app, which also has to be deployed to the device. To install this provisioning profile, simply download it and double-click it. XCode will automatically add it to the list of provisioning profiles in the Organizer.

In-house distribution is another way to distribute apps besides the App Store. As we have both the ADP and ADEP, this kind of distribution is commonly used for sending test builds to the clients. Prerequisites in the developer portal are:

For the regular ADP, the provisioning profile types which can be chosen are: development, ad hoc and App Store.

Ad hoc profiles are used to distribute the app to the devices which are chosen while generating the certificate. So, the devices on which the app should run are predetermined and should be pre-added to the developer portal.

TestFlight is another common way of sending the builds directly to clients. You use the App Store provisioning profile type, and the build is uploaded to App Store directly. 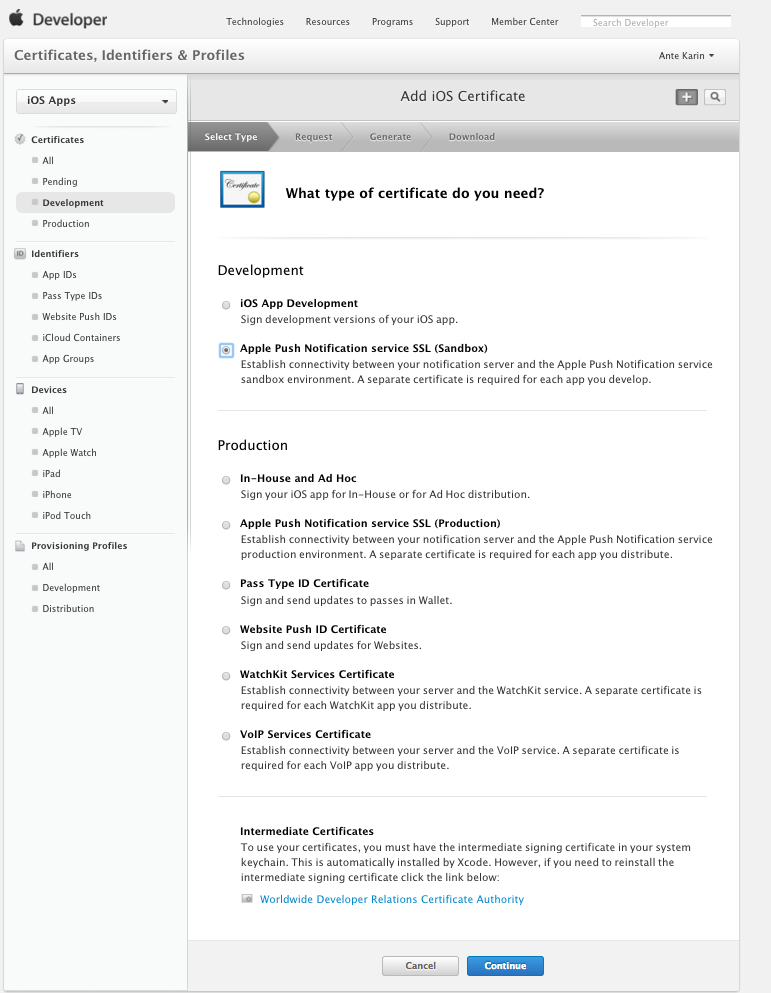 The attached image displays the generation of an APNS development certificate. After continuing, you should select the App ID for the target app and upload the certificate signing request. Again, the process is the same as with generating a personal certificate:

After completing the CSR upload, save the APNS SSL certificate to disk (you can find it in the Keychain App).

Generating APNS Production certificates is very similar. All you have to do is choose "Production" under "Certificates" and choose the Apple Push Notification service SSL (Production) in the "Select type" step. The following steps are the same as for the Sandbox SSL certificate generation.

The certificates will be used by the API, which will be responsible for initiating push notification messages.